This month, one of my photos of Parker Center was featured in the Winter 2017 edition of Preservation Magazine. The magazine is published by the National Trust for Historic Preservation, which is a nonprofit organization focused on saving and preserving historic sites and structures throughout the country. 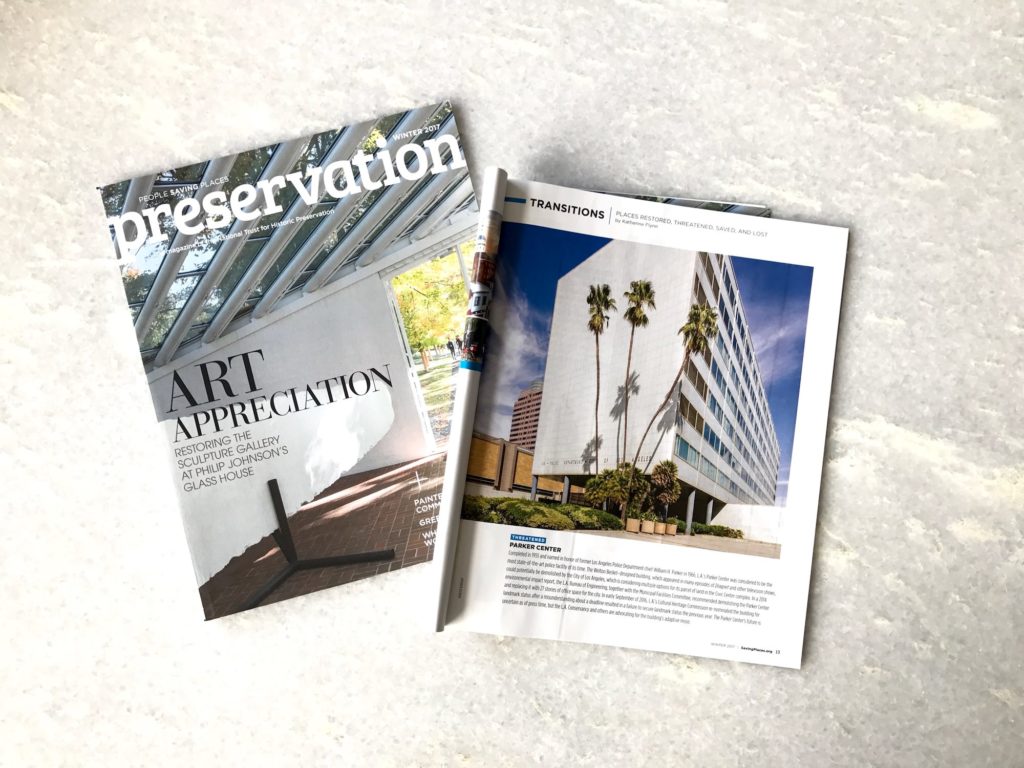 The photo is one of several that I originally took for the Los Angeles Conservancy in 2014. During that summer, after an environmental impact report was released, the L.A. Bureau of Engineering and Municipal Facilities Committee recommended Parker Center’s demolition. In its place, a 27-story office tower would rise and bring 1.1 million square feet of office space to downtown’s Civic Center. The Conservancy immediately launched a campaign to preserve the historic LAPD Headquarters and advocated for a master plan that incorporated adaptive reuse. 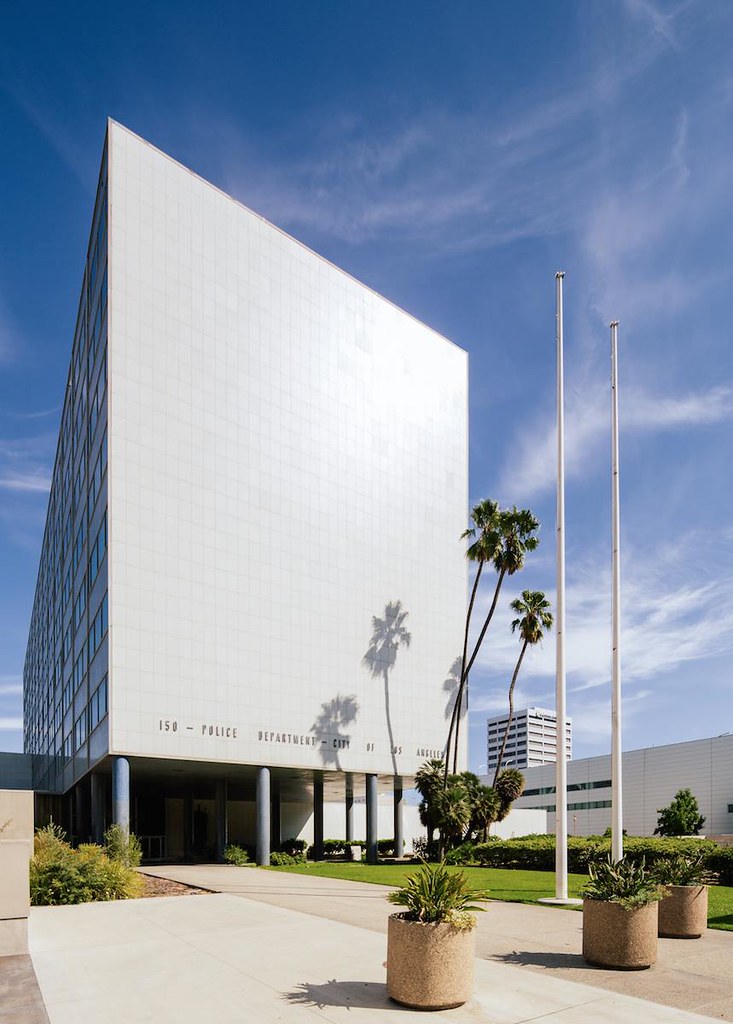 To be honest, I had expected the city to demolish Parker Center after LAPD moved into their new building in 2009. After all, I grew up hearing my grandparents and my parents talk about the scandals and disrepute that had shrouded Parker Center for as long as I could remember. Plus, the city doesn’t exactly have a good track record for keeping historically significant structures around. It’s great to see that the Conservancy has brought national attention to this threat. Regardless of the cloud of controversy, there’s no denying the old LAPD HQ has played a huge role in Los Angeles’ civic, cultural, and architectural history.

A Brief History Of Parker Center

The Police Facilities Building was completed in 1955. It was designed by J.E. Stanton and Welton Becket & Associates. Welton Becket also designed LA icons such as Capitol Records Tower, The Cinerama Dome, and the now-demolished Pan-Pacific Auditorium. The front landscaping was designed by renowned landscape architect, Ralph E. Cornell. Two original artworks were commissioned for the building. One is a bronze statue titled “The Family Group” by artist Bernard J. Rosenthal. The other is a mosaic mural titled “Theme Mural of Los Angeles” by artist Joseph Young. The International Style structure was one of the first examples of postwar modern architecture to come to Downtown LA. It stood in radical contrast to other Civic Center buildings like City Hall and the old Hall of Records. 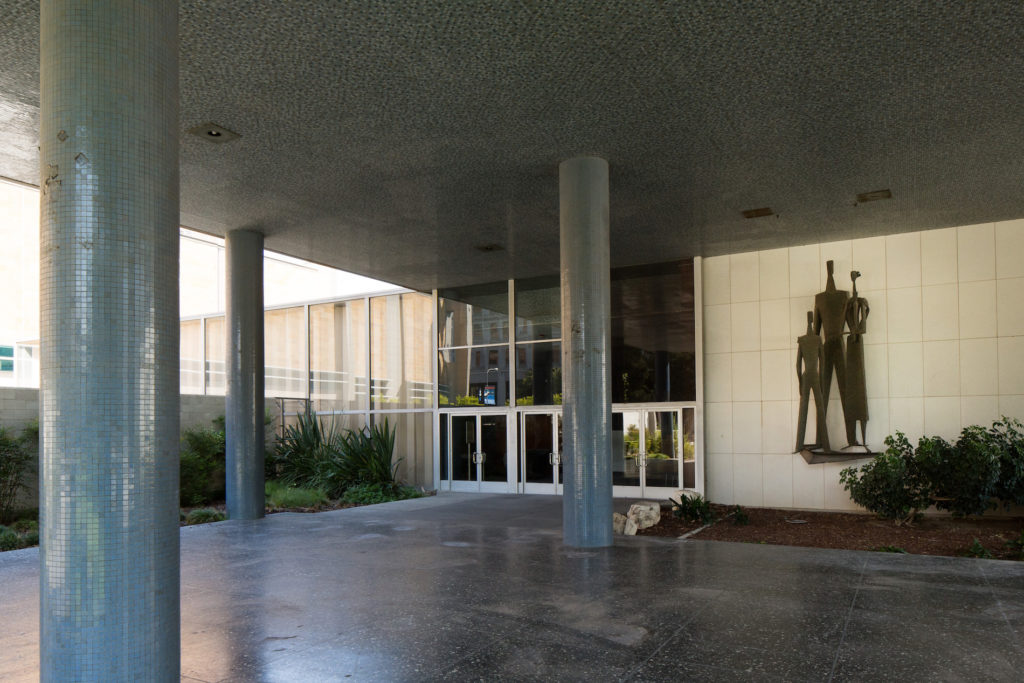 As LAPD notes on their historic timeline, the Police Facilities Building was a revolution to the design of law enforcement structures. The eight-story facility centralized all of the widely scattered police divisions under one roof. The idea was to bring the Detective Bureau, communications and information, traffic control, a state of the art crime laboratory, a lineup auditorium and jail cells together to provide complete service while saving time and resources. It was considered one of the first centralized police buildings in the nation; and it influenced the design of central law enforcement buildings across the country. In 1966, the building was renamed to Parker Center in honor of the late Chief William H. Parker, who passed during the time of his service.

Is There A Future For Parker Center?

I’ve seen dozens of articles and impassioned Facebook posts since the announcement of possible demolition, and both sides have made thorough and persuasive arguments. Saving the building and revitalizing it through adaptive reuse would help to preserve an example of LA’s early modernist architecture. Demolition and reconstruction of a new office tower could help to jumpstart the revitalization of Civic Center’s eastern border. Either way, it is imperative that the original works of art are preserved and incorporated into property or displayed in Civic Center to serve as a public memento of the city’s history. Author D.J. Waldie wrote a great piece for KCET that outlines the politics, pushback and overall process that has riddled Parker Center for the last several years.

It is still unclear on whether or not the building will receive historic landmark status, but my gut tells me that Parker Center is not long for this world. Over the last century, the city has demolished so many incredible historic buildings, and I’m glad I was able to photograph this one before it was already gone.

The LA Conservancy has reported that the Los Angeles City Council has voted to move forward with building the office tower, meaning demolition for Parker Center. You can read an in-depth write up here.