June 10, 2016 Downtown Los Angeles, Historic
I’ve walked by the Commercial Exchange Building at 8th and Olive hundreds of times, and there are always two thoughts that strike me: how incredible the gigantic neon sign will look once someone lovingly restores it and George R. Kress.

In 1924, architects Walker & Eisen build the 13-story Beaux Arts style building. Albert R. Walker and Percy A. Eisen were also responsible for the Wilshire Royale building, as well as the office tower (excluding the theater) that now houses DTLA’s Ace Hotel. So where does George Kress come in?

Just a decade after Commercial Exchange was built, a new city ordinance implemented to widen Olive Street. Due to where the building sat, it was an unachievable task. The owners of the building, Olive Holding Co., faced the risk of demolition. To save their investment, they reached out to Walker & Eisen for solutions.

Enter George Kress, head of Kress House Moving Co., a 53-year-old self-educated contractor originally from Pittsburg. He told the building owners he would be able to remove a slice of middle section of the building and then proceed to push the western half back towards Hill St, allowing for Commercial Exchange to co-exist with the Olive Street expansion.

Kress was awarded the job at the estimated cost of $60,000. With a 20-man crew, Kress cut out a five-foot section that was being used as hallways and storage, as well as excavated underneath the building to place the jacks, rollers and tracks. After 70 days of thinning out, the crew amassed to 75 people, and the great push began. In only 9 hours, the west-facing half of the building was moved 5 feet back and rejoined with its other half.

Back in the day, moving buildings was not a rare occurrence. However, I cannot find evidence of any other building that still stands in Downtown LA that has been shortened and moved like Commercial Exchange was – and I think it is a hugely unique attribute to our local history.

After a 50-year run, the building finally succumbed to abandonment in the ’80s. It most notably served as home to the Owl Drug Co. headquarters and Edgar Rice Burroughs, the author of “Tarzan.”

Flash forward to almost exactly two years ago, when Sydell Group, Ltd. (responsible for Ace Hotel NYC and the Line Hotel in Koreatown), along with partners Yucaipa Cos. and AllianceBernstein, announced they would be developing the Commercial Exchange Building into a Freehand Hotel – a hostel-meets-modern-amenities hotel. With plans to convert the historic building’s 116,230 square feet into 226 hotel rooms, a bar, a restaurant, ground-floor retail, and a rooftop pool and lounge, I knew I had to see it before the transformation took place.

It was a bit surreal to see all of the old retail shops that had been masked behind an aging, temporary facade of bland grey for as long as I’d been walking downtown. While some stores were indistinct shells, I happened upon the remains of an herbal medicine shop, a photo studio still full of thousands of headshot negatives, and the Italian Kitchen, which was still of booths, plates, and overly-themed decor.

I made my way up the marble staircase, floor by floor, trying to find any indication of the seam where the two halves had re-merged. Instead, I was distracted by an old switchboard, the original wooden doors with the titles of the tenants,

All of the old Commercial Exchange remains have now been cleared out, as Sydell’s $40 million improvements are well under way. Freehand is going to play a huge role in revitalizing the 8th Street corridor, and alleviate the severe shortage of hotel space in DTLA. If anything, I’m just glad they are finally restoring the largest vertical neon sign in Downtown – you can be sure I’ll be waiting with my camera the second it is relit. 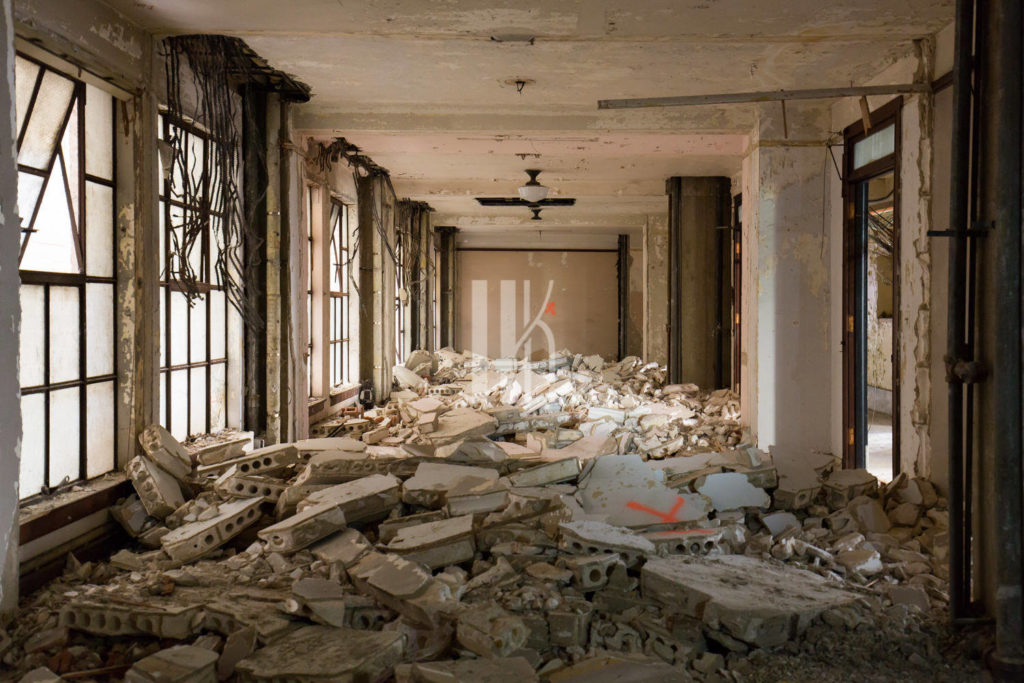 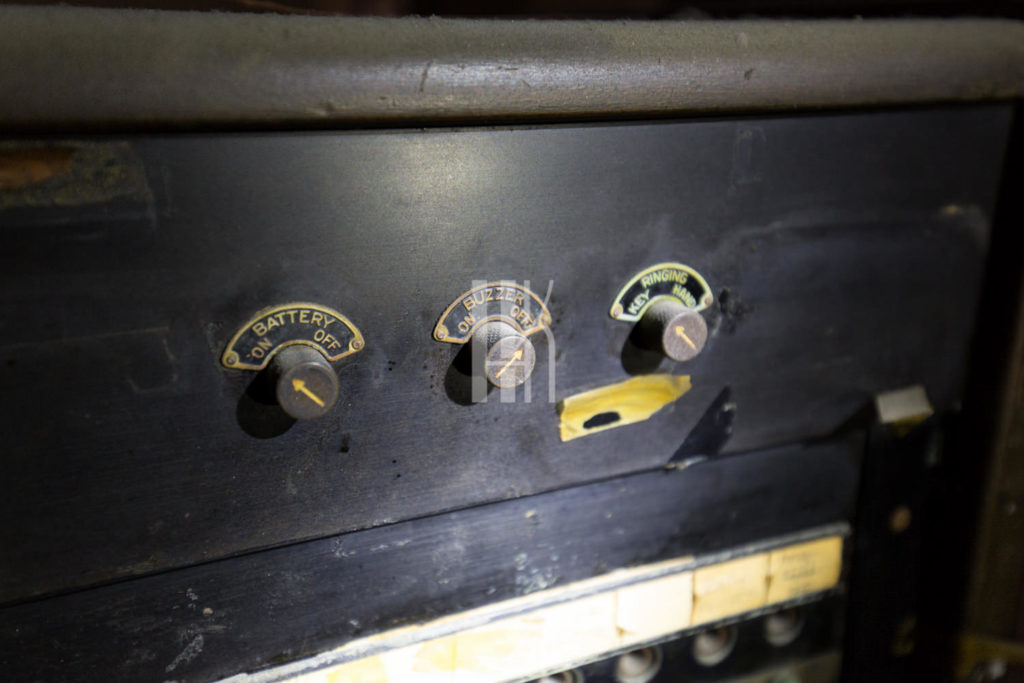 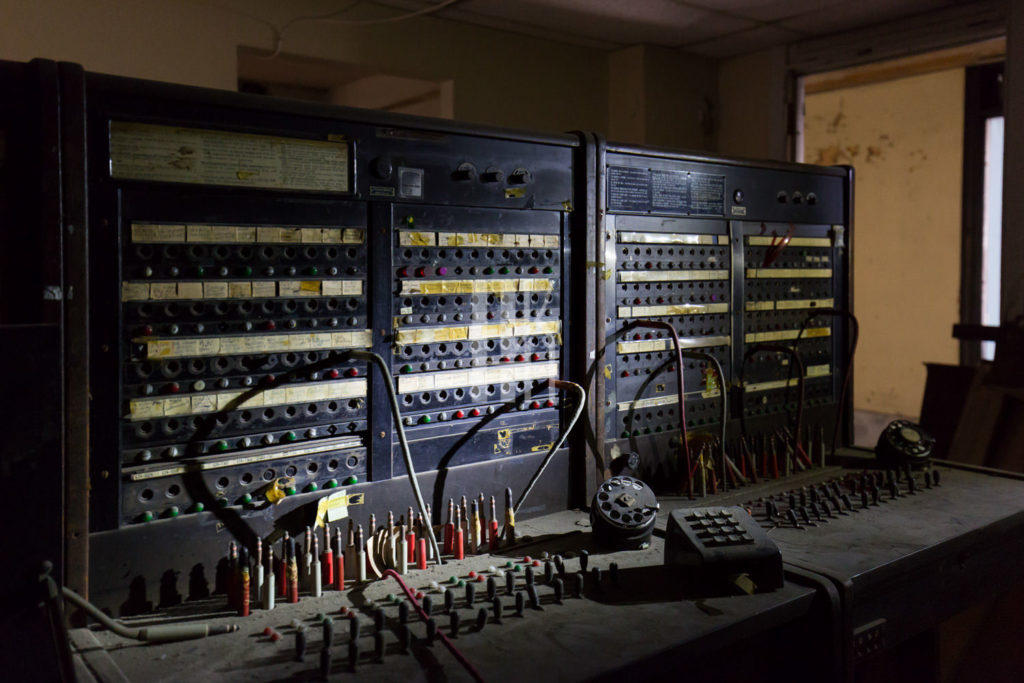 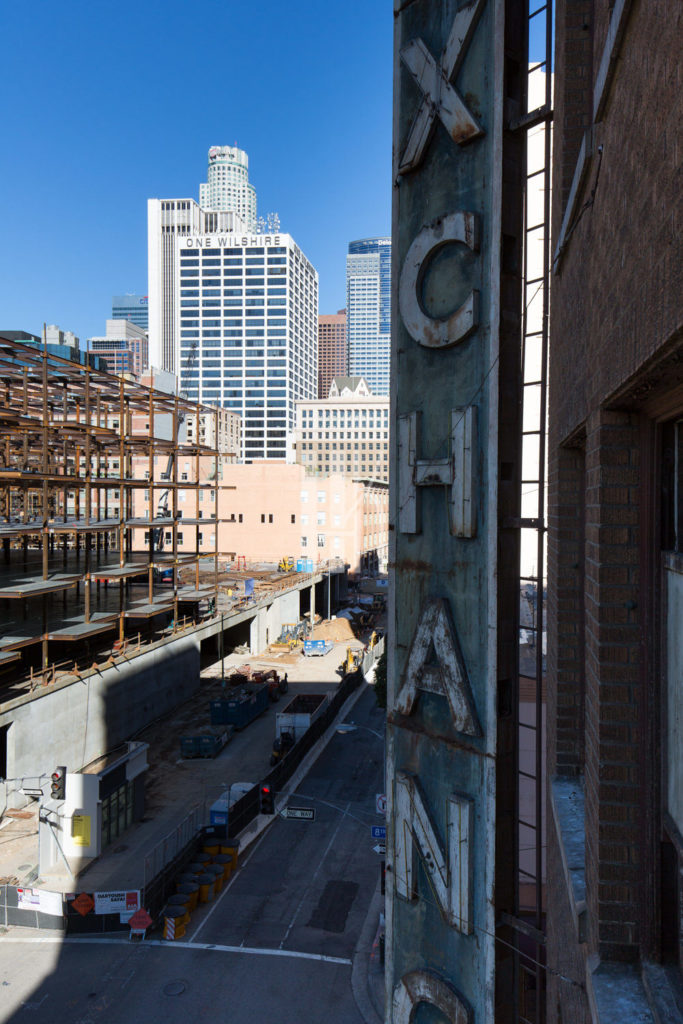 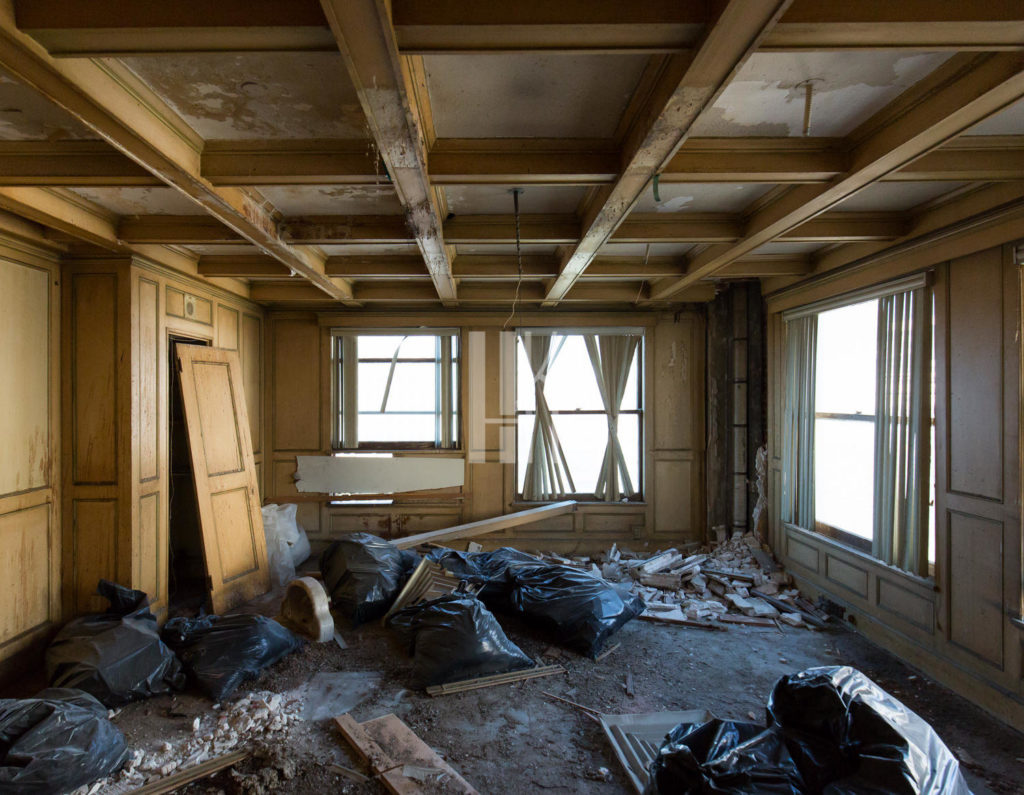 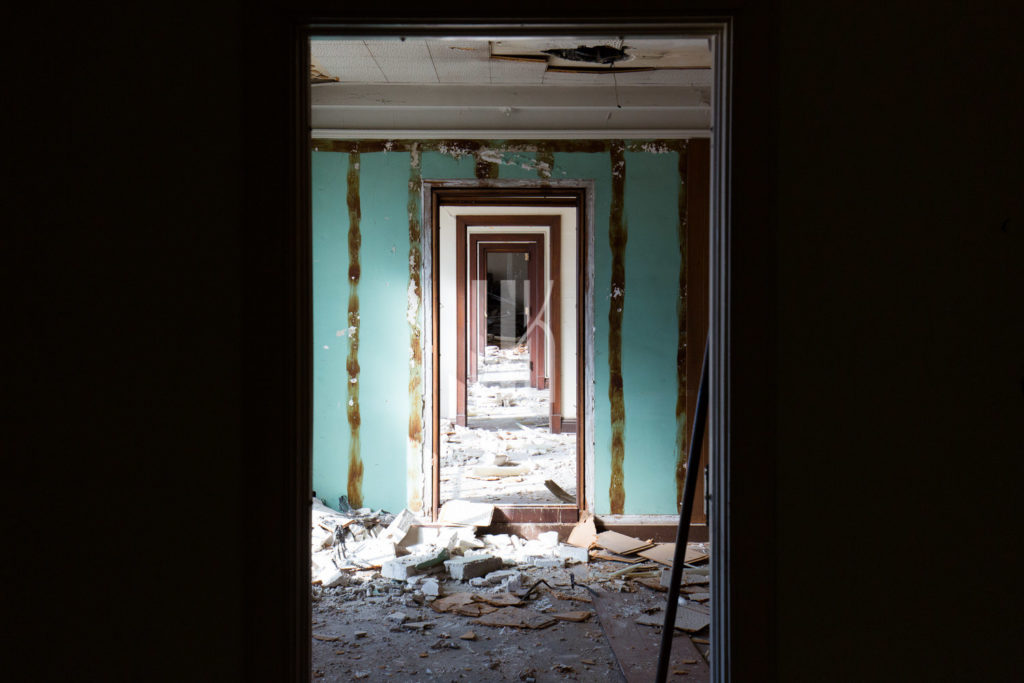 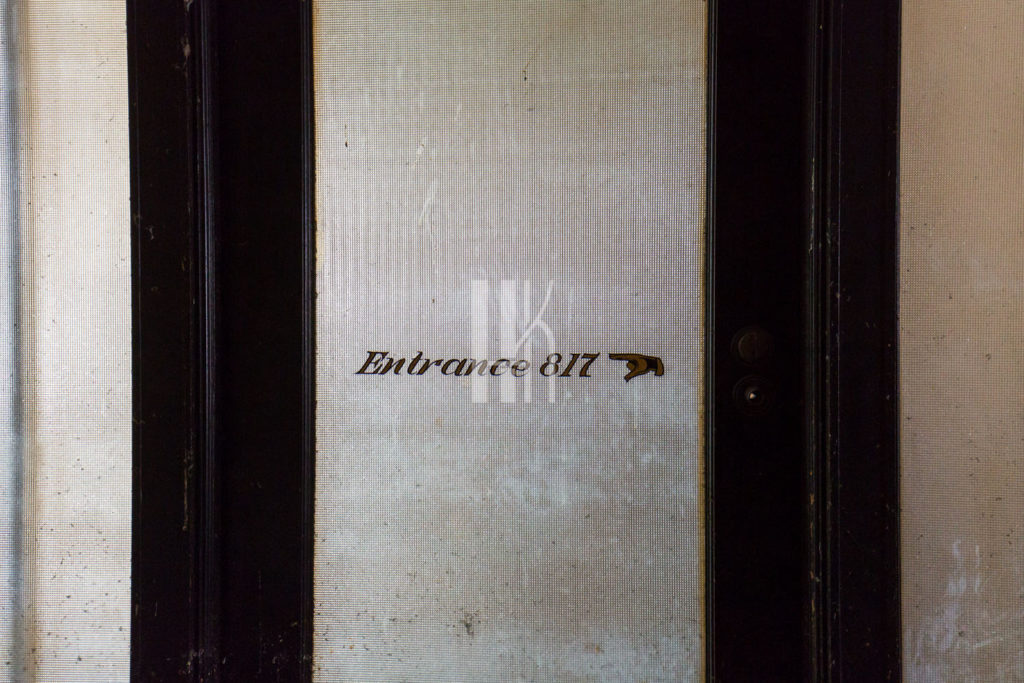 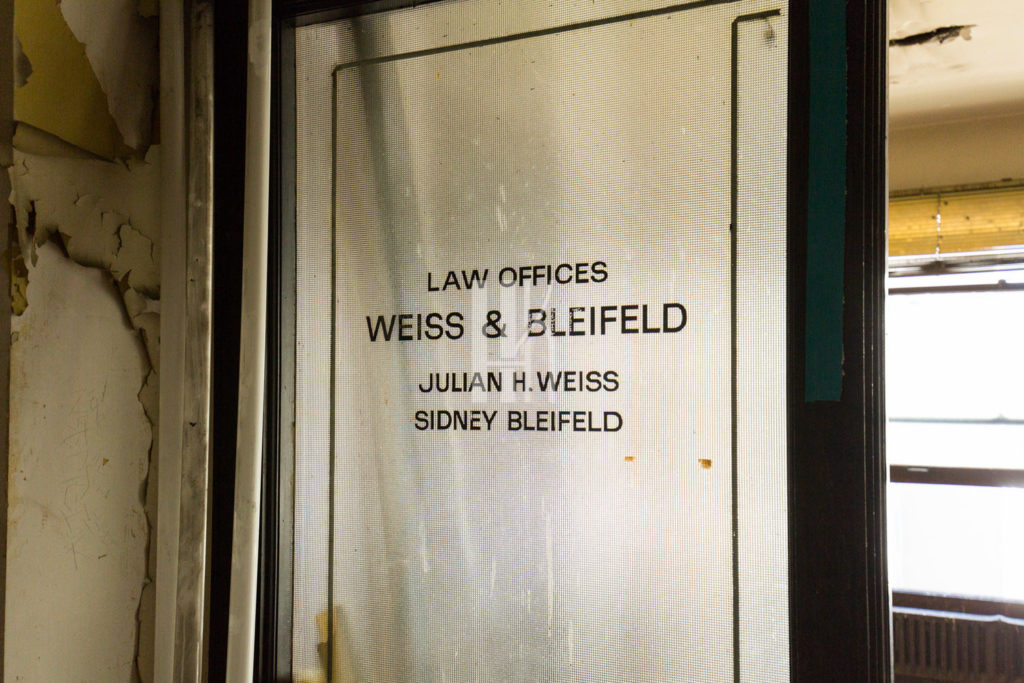 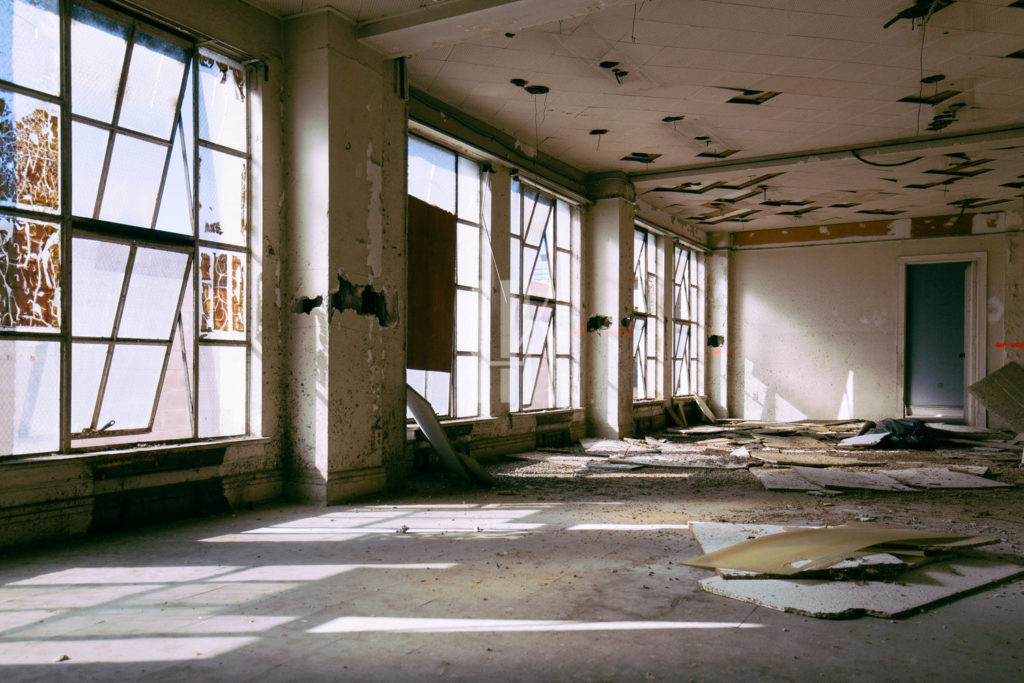 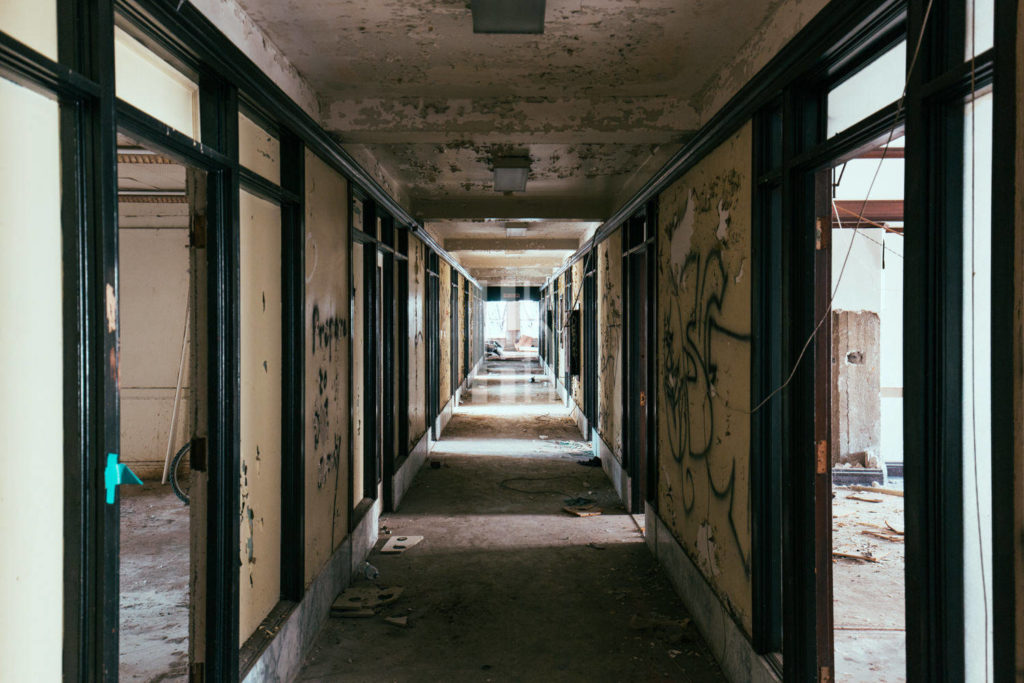 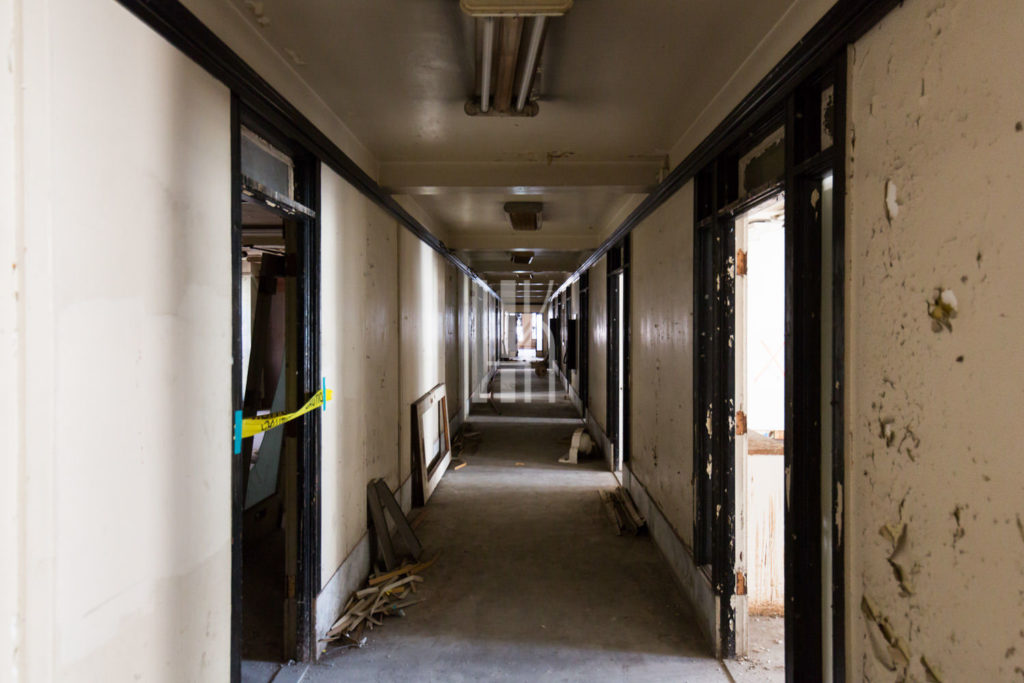 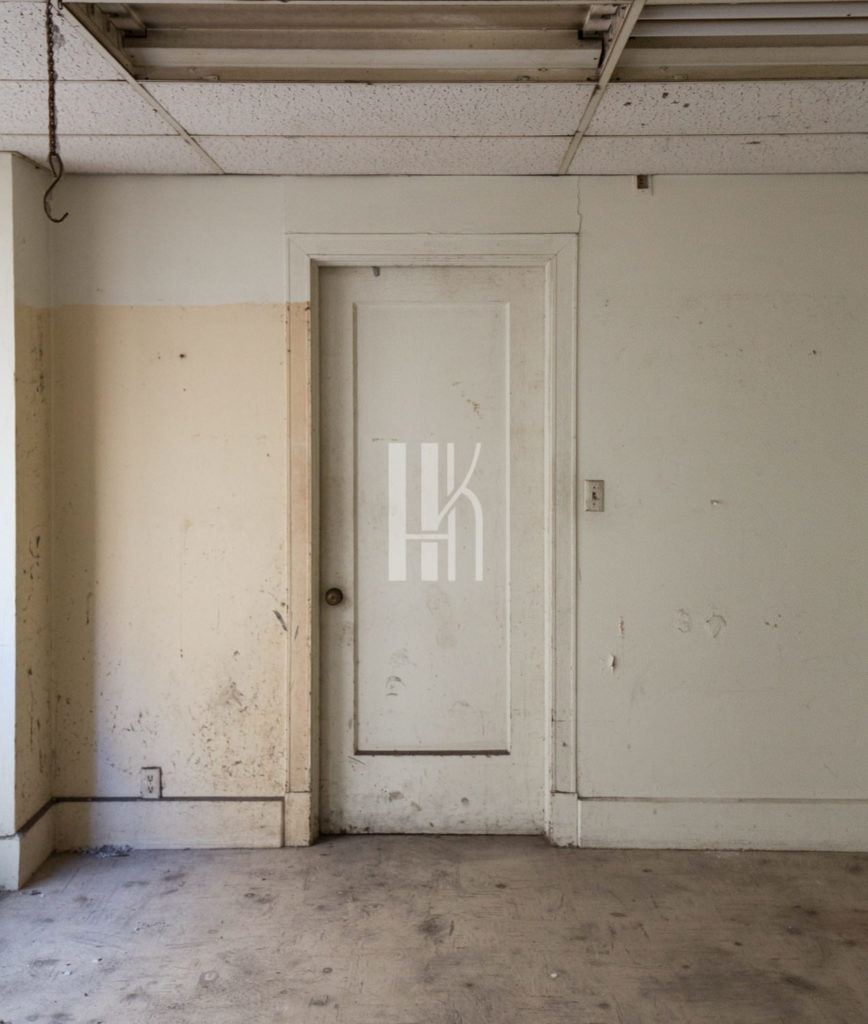 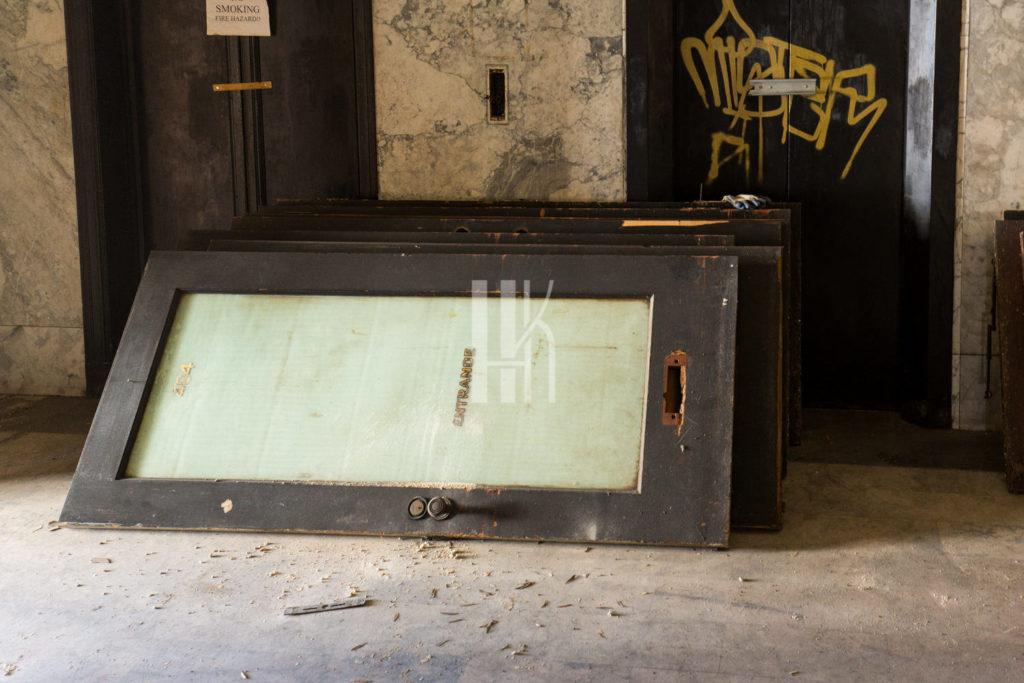 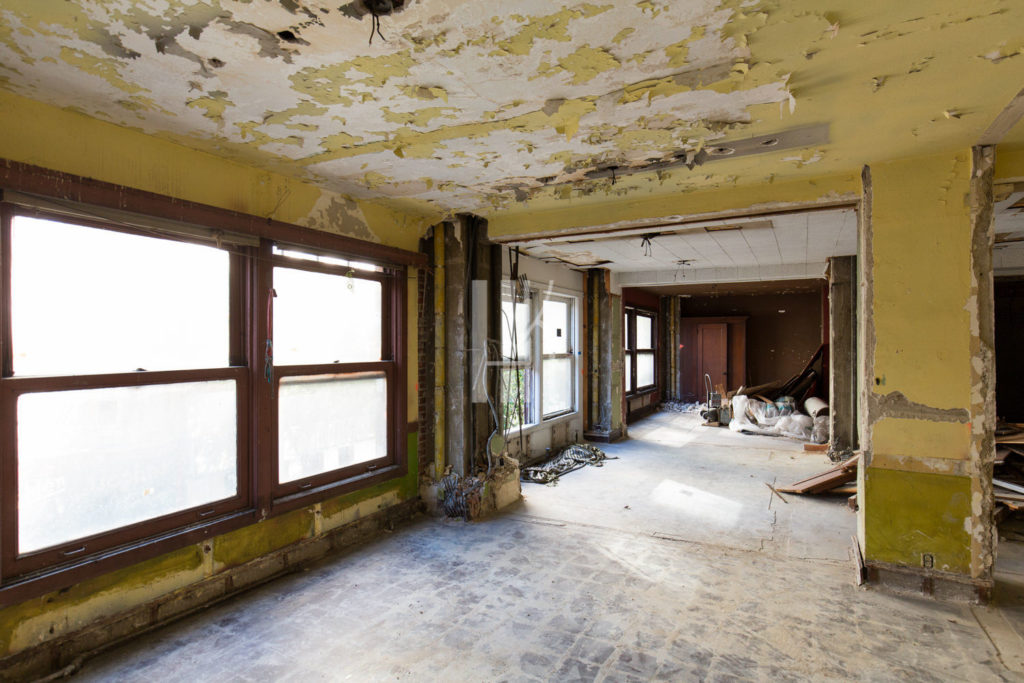 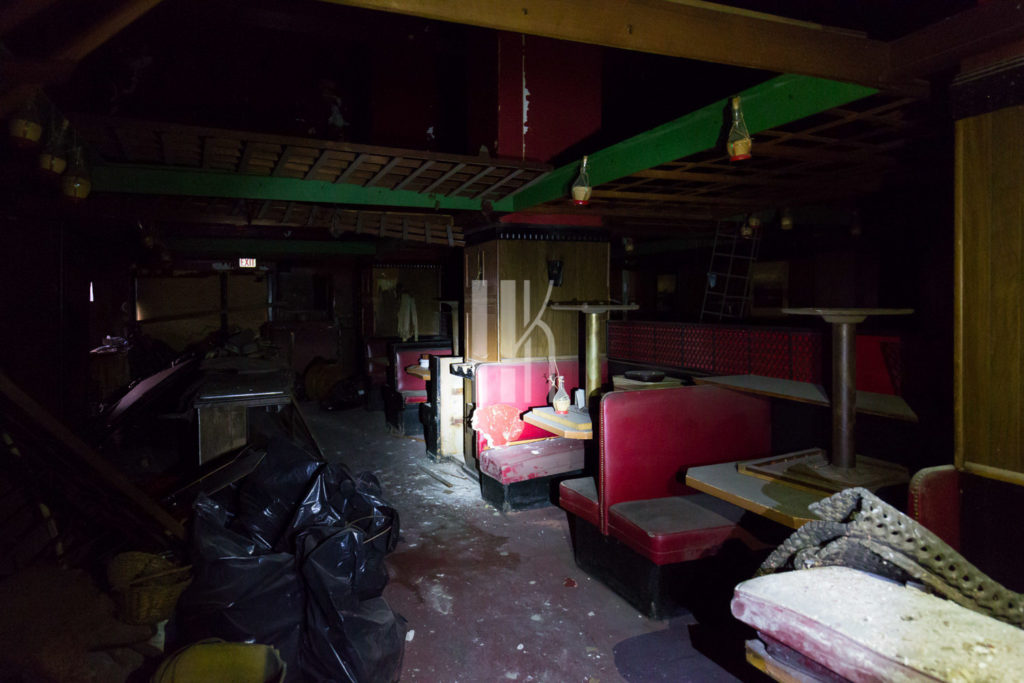 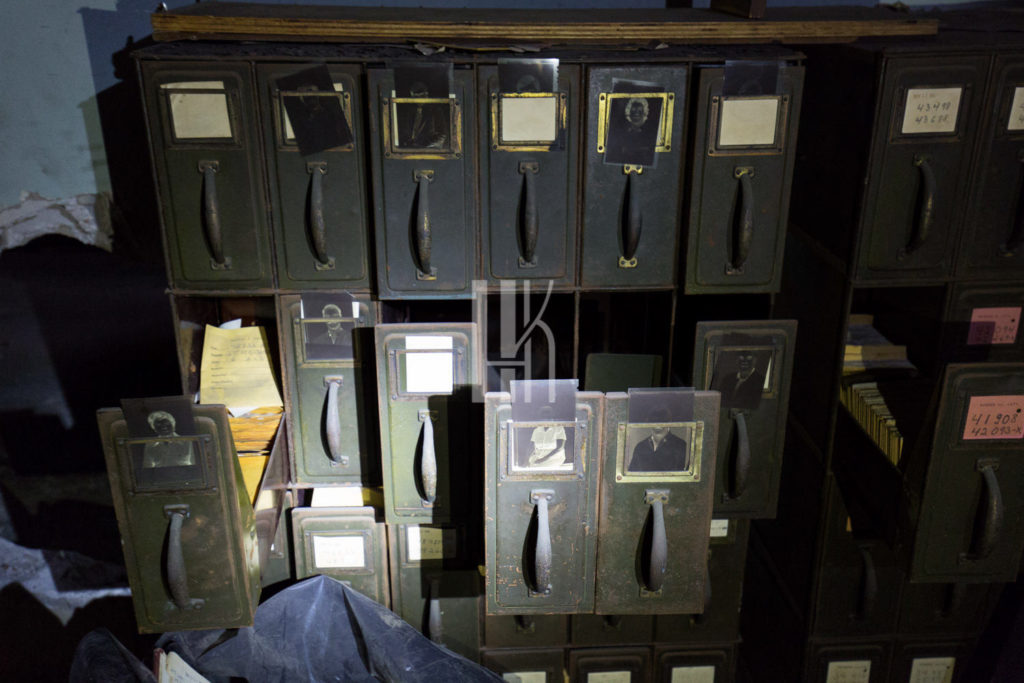 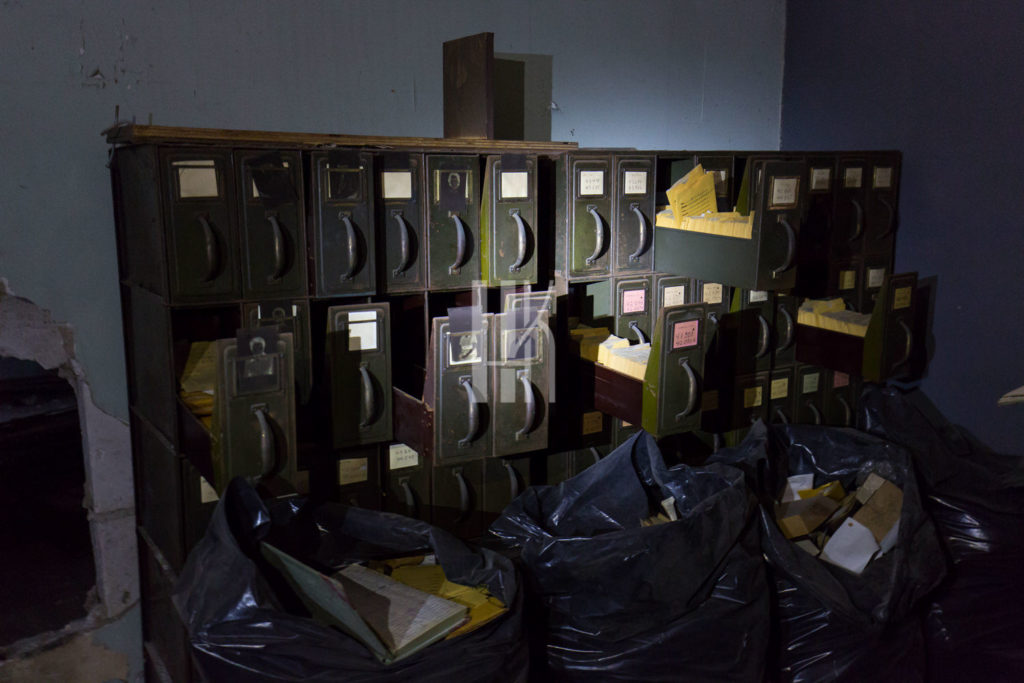 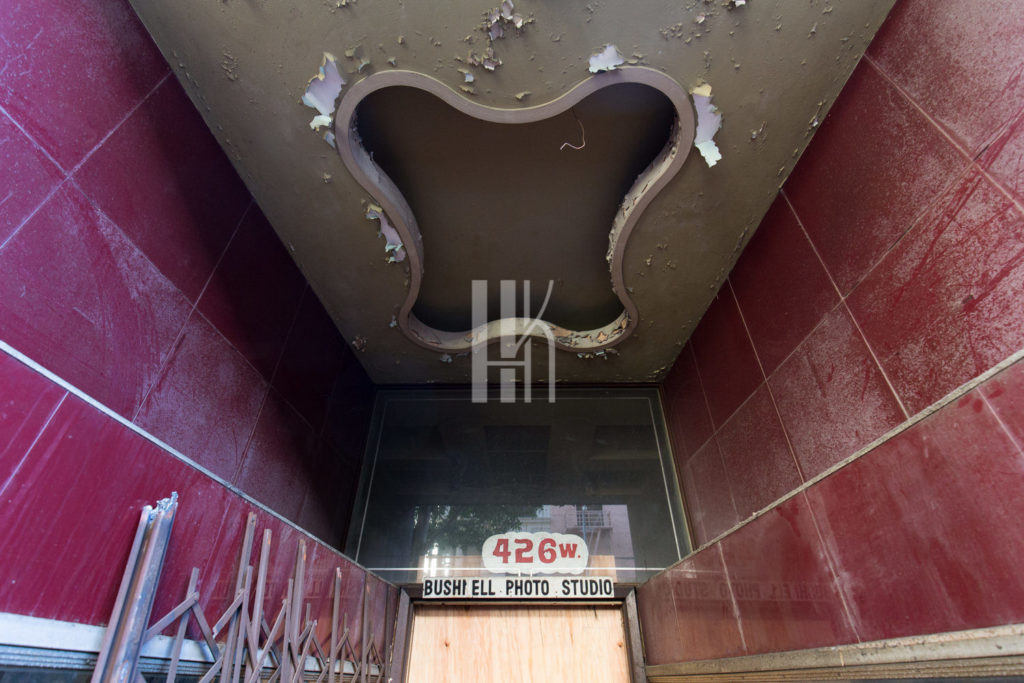 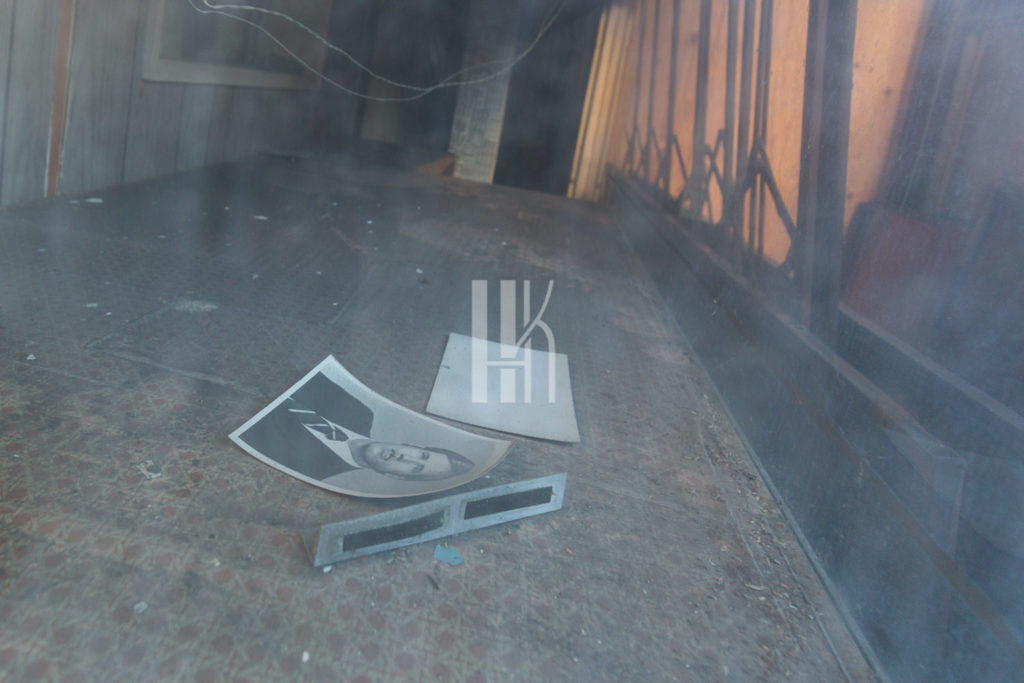